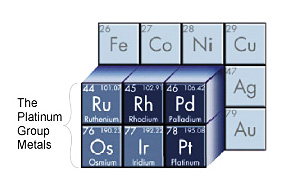 Palladium is one of six metals in the platinum family. It has similar characteristics of platinum, such as high melting temperature, cool gray color, durability and rarity, however, it is much less dense (lower specific gravity). Palladium is light gray, noble, malleable, lightweight, hypoallergenic, easy to finish and polish, does not require rhodium plating, does not tarnish, and has desirable, platinum-like setting and forming characteristics.

The price of palladium is far too high for custom rings at this time (2021).

Palladium is a noble metal like platinum that is used to create fine jewelry, and like its sister metal, platinum, it can be used as an alloy of 95% purity. Compare this to White Gold alloys which require a large percentage of alloying metals. 14k gold is only 58.5% pure.

Palladium is a white metal that, like Platinum, enhances the beauty of diamonds and gemstones set within it. Because its white color is natural and not the result of plating or alloying, Palladium's white has great depth and luster.

Palladium is a platinum group metal and is thirty times more rare than gold. Mined together with Platinum in less than six regions around the globe, Palladium is truly a precious metal and a fitting symbol of love, life and other rare gifts. Palladium provides the luxury, purity and look of Platinum for the price of White Gold.

Palladium, like Platinum, is naturally strong and durable when used in a higher purity alloy than other metals such as silver and gold. Resulting in a more hypo allergenic product, Palladium does not suffer from prong failure, which is typical of many White Gold settings.

Palladium strikes a harmonious balance: more durable and less susceptible to tarnish than White Gold, but as malleable as Platinum. Palladium can support delicate designs which are difficult to to execute in White Gold yet has the malleability to facilitate easy sizing, repair, etc.  We have made rings, necklaces, bracelets and earrings in palladium, and have mounted a variety of precious and semi-precious stones in this metal.

Palladium was discovered in 1803 by William Hyde Wollaston.  It is named after the Greek goddess Pallas, who is the goddess of wisdom, the arts and the embodiment of purity and strength.

When World War II began, the British government declared Platinum a strategic metal and its use in non-military applications, including jewelry, was disallowed. As a result, Palladium made its first appearance in jewelry in 1939. The demand for wedding bands increased during the early 1940's and many were made of Palladium.

In response to the Clean Air Act of 1970 and the rise of environmental or 'green' legislation worldwide, both Palladium and Platinum were increasingly sought by the auto industry to produce the auto catalysts used to reduce car emissions. As Platinum became the more popular industrial metal, the demand and therefore the price of Palladium decreased and stabilized, bringing it increasingly into vogue for fine jewelry applications.