Museums and Galleries Showing Our WOrk


We were invited to exhibit our Sputnik Engagement Ring and Moon Wedding Band in Out of This World! Jewelry in the Space Age at the Wertz Gallery inside Pittsburgh's Carnegie Museum.

With an abundance of feathered creatures, colorful flowers and intriguing insects, the world is alive with inspiration for artists. This exhibition features a diversity of artwork by 63 Arizona artists from 22 cities around the state. 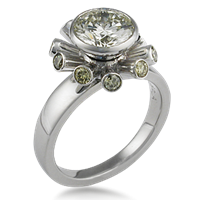 March 16-September 7, 2013
Out of this World!
Jewelry in the Space Age Exhibition

We are excited to announce that we were invited to participate in an exhibition to be held in the Forbes Building galleries. The exhibition is curated by Elyse Zorn Karlin, Co-Director of the Association for the Study of Jewelry & Related Arts. The works on display will be pieces of jewelry influenced by space exploration. We are submitting our Sputnik Engagement Ring!

Arizona ranks second in the US in gemstone production. This is an exhibition featuring gemstones native to Arizona, and 16 Arizona artists. Krikawa's piece features a Concave Cut Four Peaks Amethyst marquise, Ant-Hill Garnet, and Kingman Turquoise. Along with the amethyst and turquoise, San Carlos peridot is another important Arizona gemstone that was featured in the show.