Out of This World: Are Black Diamonds from Space? (Updated 2019) 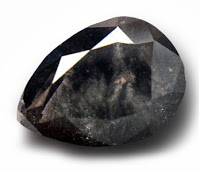 The Origin of Black Diamonds

Where do black diamonds come from? This question has only increased the mystery surrounding these amazing gemstones, and the answer to the question of origin is even more alluring than their unique appearance. Black diamonds are less commonly known as carbonado, and scientists believe that outer space may actually be the birthplace of these particular stones. 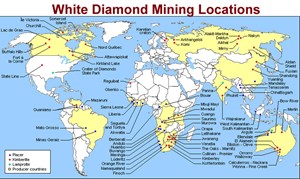 credit: www.info-diamond.com
Colorless diamonds are formed deep within the Earth’s mantle, and gradually make their way up near the surface by way of volcanic eruptions and the resulting magma. Upon close examination, scientists found that the carbon isotopes of black diamonds are characteristic of surface carbons and not those that are found in the depths of the Earth.

By the time a white diamond reaches the surface of the Earth, it will be about 1 billion to 3.3 billion years old. 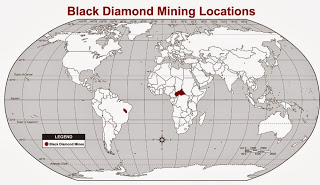 These colorless diamonds are mined in a variety of countries all over the world, including several states in the US. Black diamonds, however, are found in only two places on Earth. They were first found in Brazil in the 1800s, and have since been found in central Africa. To this day, these two countries remain the only sources of natural fancy color black diamonds. 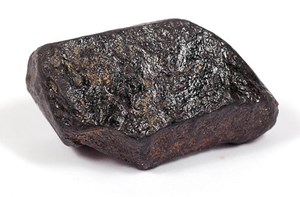 Raw Black Diamond
credit: goldbergcoins.auctionserver.net
The high content of hydrogen suggests that these stones originate from a star-like environment, such as that of hydrogen-rich interstellar space. The theory that space is, in fact, the birthplace of black diamonds is widely accepted in the scientific community. The fact that these diamonds have differing carbon isotopes, are rich in hydrogen, and just simply do not adhere to the rules of diamond mineralogy all point to a cosmic origin. Intensive study of these diamonds shows them to be most closely matched to other diamonds that are found only in outer space. However, the exact origin and the manner in which black diamonds made their way to Earth are very much matters of debate. 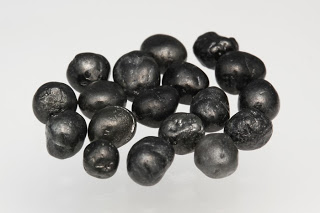 Black Diamond Ballas
Credit: Krikawa.com
Supernova: Some scientists believe that large asteroids were formed by stellar supernova explosions which then traveled through space, landing on the earth some 2.3 billion years ago.

Meteorite: Another theory is that carbon atoms or grains of meteoritic black graphite within a hurtling meteorite transformed into diamond instantly during the intense heat and incredible shock of impact with the Earth.

Red Giant: Dr. Stephen Haggerty offers what is currently believed to be the most likely explanation of black diamond origin. 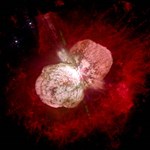 
How Old? Older Than Time

Black Diamond Meteorite
credit: Steve Haggerty
Black diamonds are born in dying stars, later falling to earth either in fragments or within meteorites. Studied under infrared radiation, black diamonds have been shown to have a chemical spectrum that indicates they originate from a time before the formation of the earth, putting these diamonds at an incredible age of about 4.5 billion years. Recent atomic measurements place the origin of black diamonds on earth at nearly four billion years ago.

credit: dailygalaxy.com
This was a time when Earth was under a constant barrage of meteor collisions. It’s also theorized that black diamonds came to earth during an asteroid event that struck when Brazil and Africa were still one continent, which explains their presence in these two countries and nowhere else on the planet.
Born of exploding stars and asteroid impacts, no other gemstone has such a fascinating and incredible story. Coming into being before our planet, your natural black diamond will be the oldest thing you ever own at an extraordinary 4.5 billion years of age. For more information, see the article at the National Science Foundation: Diamonds from Outer Space: Geologists Discover Origin of Earth's Mysterious Black Diamonds

What will your black diamond's story be? 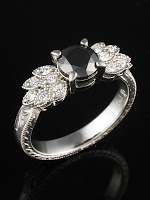 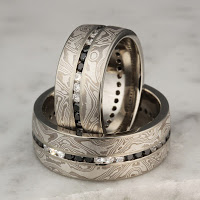 At Krikawa, you can learn more about black diamonds, including how to evaluate a black diamond. There is also a complete collection of natural black diamonds in all shapes and colors. Choose from natural untreated or color enhanced, and pick the perfect diamond for your black diamond engagement ring or black diamond wedding band.


What do YOU think of black diamonds?  I want to know!

Please leave a comment!  Your feedback is important to me :-) Look Around
NEXT ARTICLE

VIEW ALL OUR RINGS